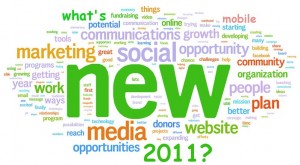 The innovations and online start-ups that have emerged in the past few months have made a major difference in the traditionally perceived use of the web. Talk more of an entire world of online communities, web strategies and as a marketing platform for businesses. The entire post will cover the expectations in social media, client relationship management, web design practices, online marketing & advertising, interactive strategies and some bit of mobile technology. Thats the introduction, so lets dig in….

Social Media Marketing & Online Communities
The trend was already set in 2009, picked up pace in 2010 and I highly doubt this year will be any different. It’s almost a surety that there will be an increase in the use of the current main social media platforms namely; Facebook, Twitter, LinkedIn, YouTube and Blogs by both individuals and organizations. The trends of an increasing Internet access due to the penetration of mobile web speaks for this. The Egyptian revolution story will make more leaders aware of the power of social media and the highly unpredictable youth who dominate the platforms. More leaders (and companies) will look to tap into this steadily growing and highly responsive market.

In Africa, the growth of social groupings around products, services and a common interest will spill over from the US and Europe. New jobs titles such as Online Community Managers and Social Media Managers will become more ‘normal’ in boardrooms and hallways conversations across the continent will be extended to online social platforms thus grow the communities in terms of numbers and content.

Universal Log in and security
The expected growth in use of the Internet (mostly through the increased penetration of web-enabled mobile phones and the current battle among Smartphone manufacturers) will be the main jolt needed for the establishment of a universal one-user multiple accounts login credibilities such as Google’s Friend Connect and FacebookConnect, MySpace’s Data Portability and the Twitter authentication options. Maybe this will lead to an all-out-war for popularity in the use of the authentication options. This generates the question of a unified legislation on online security. The recent attackers by Anonymous in support of Wikileaks showed how organized hackers are and how quickly they can get behind a cause. I wonder if they can also come together and with the same solidarity develop a regulation for themselves. With the current shift in focus by hackers and virus writers from the Windows OS as the main target to mobile devices, never before has there been a much necessary need for an effective online privacy and security protocol to be implemented worldwide.

Exclusivity and Segmentation
Is there more space for new social platforms to be created? Exclusivity provides the answer. Like it has happened in all societies, the projected increase in the population of social media users will create a need for redefining of niche groups to maintain exclusivity. This has already begun to happen with the emergence of more oriented social platforms that focus on specified areas of interest. Talk about the likes of Quora, Jumo, VC4Africa who basically end up using the default login credibilities from the main players such as the FacebookConnect and Twitter OAuth options. Some of these start ups with a niche target will have to come together and merge in order to increase capacity, enhance features and maintain relevancy in the escalating social platforms jungle. A further segmentation of the global social networks will be brought about through the development of apps which basically provide an improved version of the current features we have now come to know as groups and forums.

Online Marketing – African burst
This is more of our turf and positivity is the word. It not just about being optimistic, but the numbers tend to point towards an increased ads spending on online marketing and client engagement via social media marketing across the globe. There will be a global growth in online ad spending but the most significant growth will be in the African online scene, both from the organizations and the publishers. More and more publishers will discover that there actually exists better ways to monetize the portfolio than just running Google Ads. Not that am against Google Ads, but I am sure many bloggers can attest to this. The returns one gets from running the ads for weeks are meager, unreliable and it may just not do justice to the overall site design you had initially visualized. An upsurge of partnerships between corporates and bloggers, local ad agencies will make a dash for the available portfolio coming up with each new website cropping up. Social media will take the forefront as the main delivery vehicle for online marketing and client relationship management.

Ad spending
Local content has been on the fore-front of promoting Internet activity in many African countries. This mainly entails development of more websites thus more virgin space for online marketers. The industry is currently at a starting point but the realization of the potential and rate of ROI in online advertising is growing. The big online markets (SA, Kenya, Nigeria and Egypt) are expected to record a big chunk of the global projected online ad spending stats at the end of the year.

According to a report by eMarketer, the total expenditure in online advertising has finally surpassed newspaper ads with an estimation of $25.8 billion for online ads against $25.7 billion for newspapers. “In each of the following four years, Internet ad spending will hit new peaks…….. It may seem counterintuitive, but marketers’ concerns about the ongoing economic turbulence are driving more online ad spending. This trend reflects how most forms of Internet advertising are now seen as more of a ‘sure thing’ than most traditional media.” said the firm. Well, obviously in Africa it will not be a complete shift from the traditional media but rather sizable jolt in budgets to online ads. Just enough to turn corporate heads.

Apps and Ads
We just cannot stop the development of apps. That train left the station long ago headed to an exciting but unknown destination. Are apps killing the web? According to Wired’s editor-in-chief Chris Anderson, the web is already dead and has given way to slicker and simpler online services via the highly vibrant and futuristic Internet. Leading the pack in the new online order are smart gadgets; mobile phones and tablets through apps.

What role will apps play in online advertising? In 2010, out of the total ads spending statistics in the US, in-app ads accounted for 5% of the total value. This will most definitely rise with the development of more smart phones by Windows Mobile and Android. The newly released Android version, Honeycomb is optimized for tablets thus it is expected to further boost the development of the gadgets by manufacturers. This means more apps, more ad space. I think the guys at Google had a dream about this. They acquired Admob in May at a cost $750million with all the intentions of recouping their investment plus lots of profits. Google have taken the platform global and at the moment, the in-application ad network is currently getting over 2 billion ad requests each day thanks to both Android and iPhone owners.