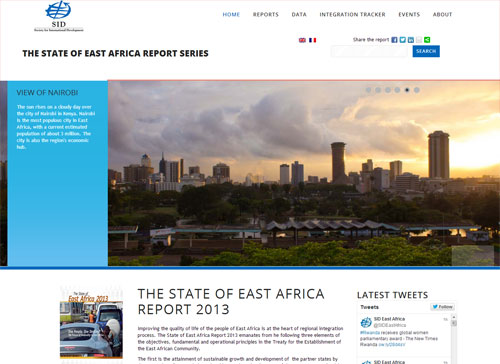 The Society for International Development (SID) is a global network of individuals and institutions concerned with development, which is participative, pluralistic and sustainable. SID plays a crucial role in promoting dialogue between various stakeholders and interest groups, both locally and internationally.

The State of East Africa Report Series provides political leaders, policy makers and citizens with information and insights about the region and the ongoing integration process. It captures the key changes facing the region and interrogates the drivers and implications of these changes.

Key Problem
Over the years, SID has produced reports on development issues affecting East Africa. The reports explore different topical areas around the economies of the East Africa region. In 2013, the current status of income and wealth inequality both between and within the five East African Community member nations (Burundi, Kenya, Rwanda, Tanzania, and Uganda) were the subject of the report. This research has been known to be data intensive and out of reach of the general public.

SID wanted to develop an online platform that will allow it to showcase its reports over the years while placing the latest report on the forefront for each year. The platform needed to reach all constituents of the region. A multilingual site was therefore a necessity with English, French and Swahili as the targeted languages. Pamoja Media was tasked to design an interactive site from the ground up in record time due to a fixed launch date across the region.

The Solution
This is what the Pamoja Media team embarked on to meet the client’s demands: